The Meteora monasteries are built on rocky pinnacles, which tower 400m over the Peneas valley on the Thessalian plain. The small town of Kalambaka is located on one side and the village of Kastraki on the other with small roads and paths taking visitors up and around the monasteries, some still-inhabited, some now abandoned.

'Suspended in the air' (the meaning of Meteora in Greek), these monasteries represent a unique artistic and engineering achievement - to turn this inhospitable area into a place of retreat, meditation and prayer. The first hermits arrived in the 11th century and built the Skiti (hermitage) of Doupiani. Over the next 600 years twenty-four monasteries in total were built. There were no passable roads and pilgrims (as well as food and supplies) had to be hoisted up the cliff in a net to reach the monasteries.

Divani Meteora Hotel is set amidst wonderful scenery surrounding the rocks of Meteora. It offers guests the opportunity to enjoy traditional Greek hospitality in an area of natural beauty.

A cosy hotel in a renovated 19th building, close to the roacks & monasteries of Meteora.

This elegant hotel enjoys a tranquil location at the foot of the Meteora rocks. 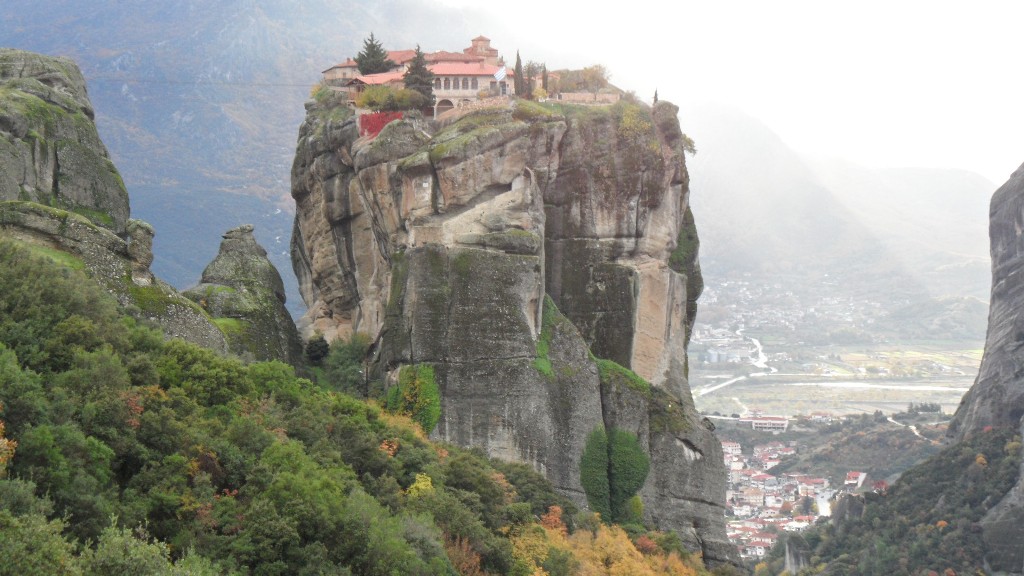 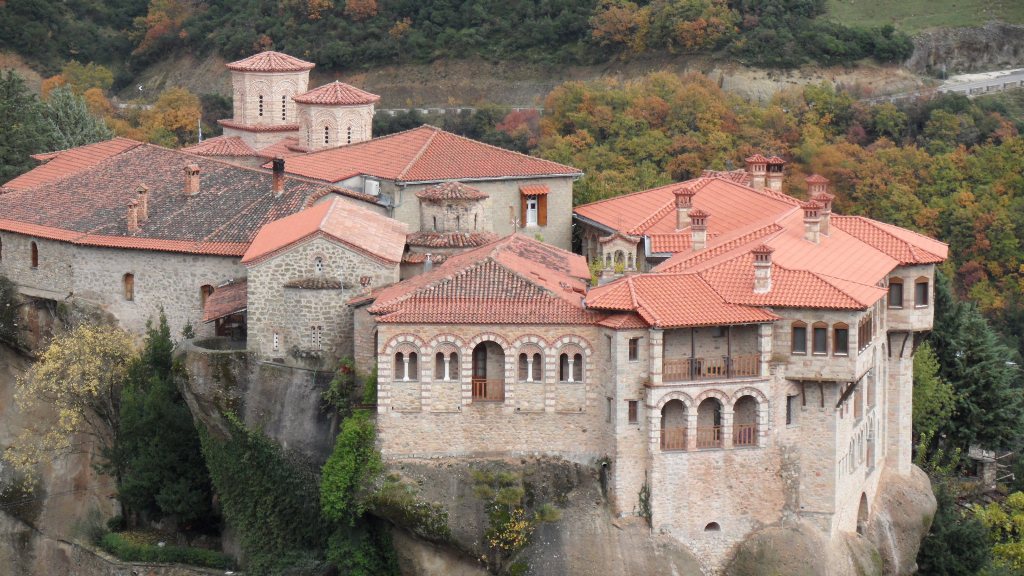 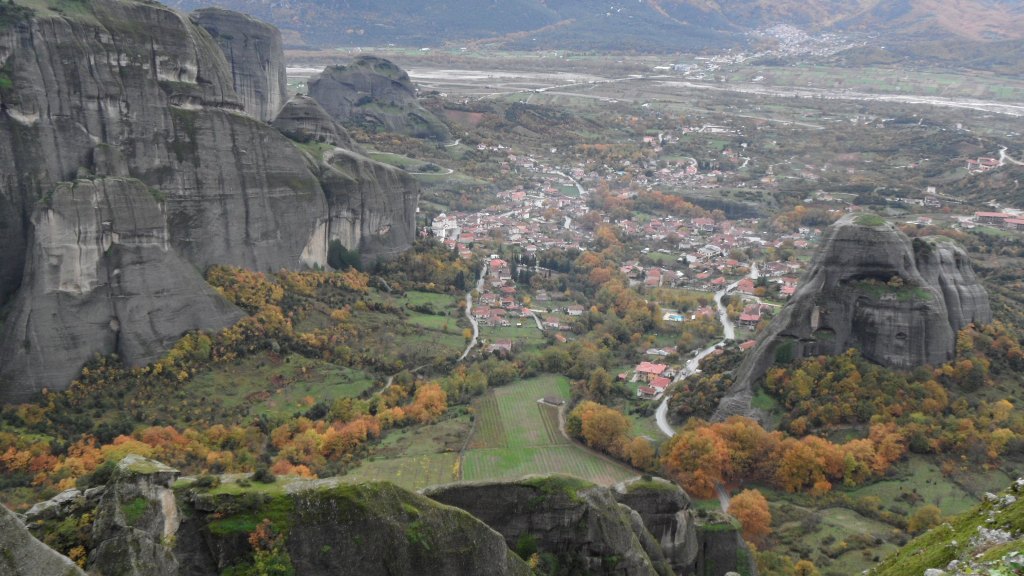 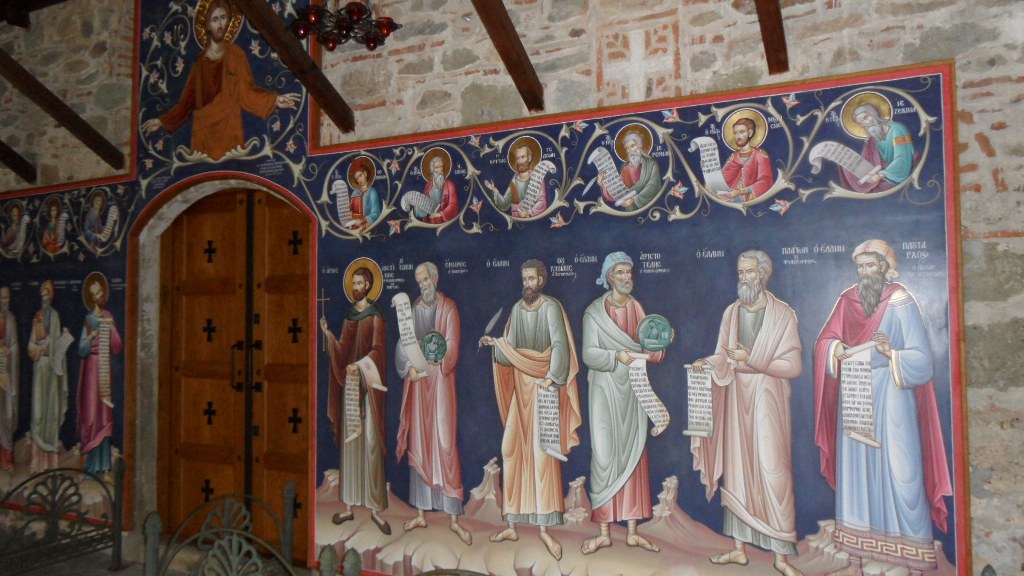 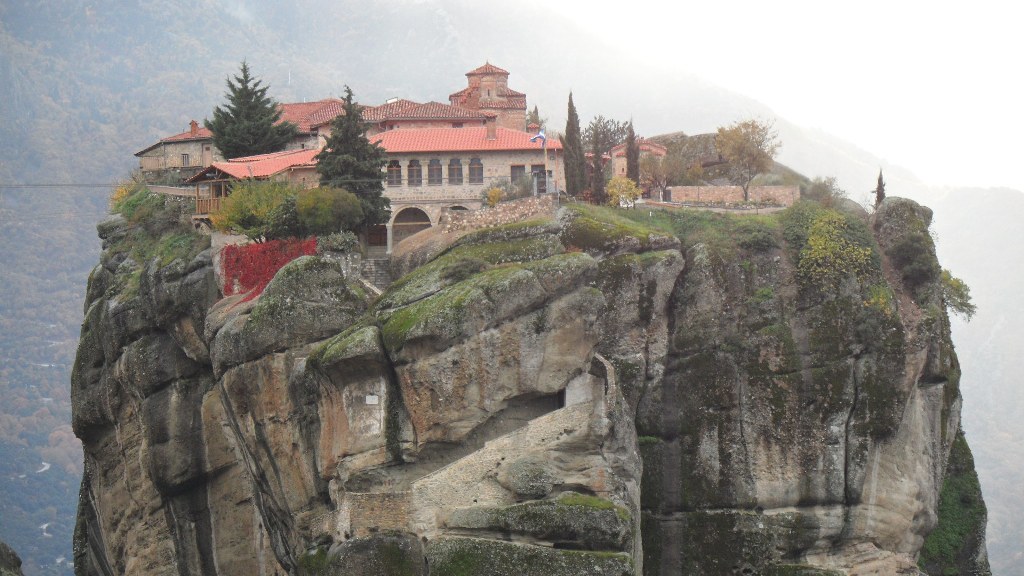 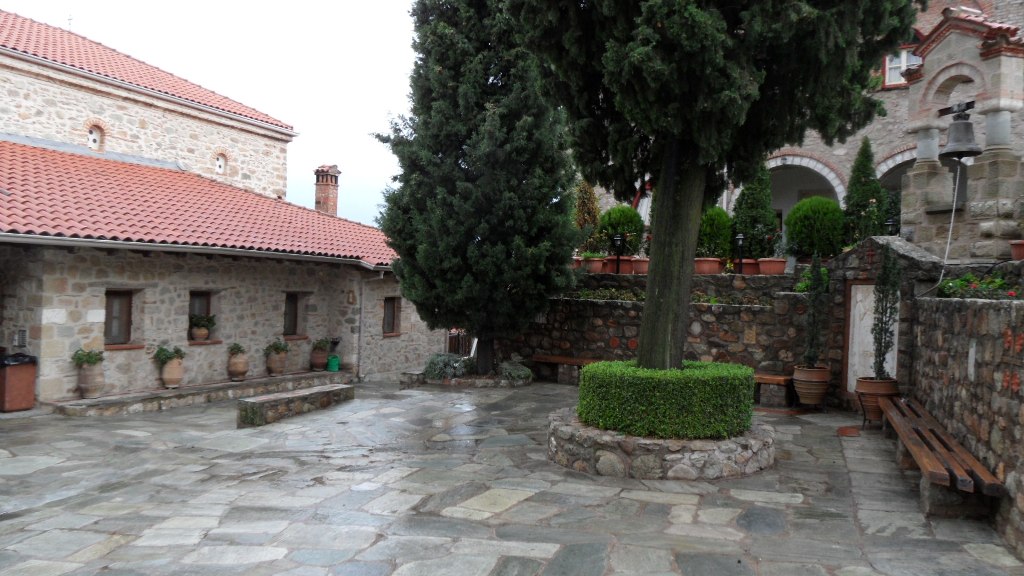 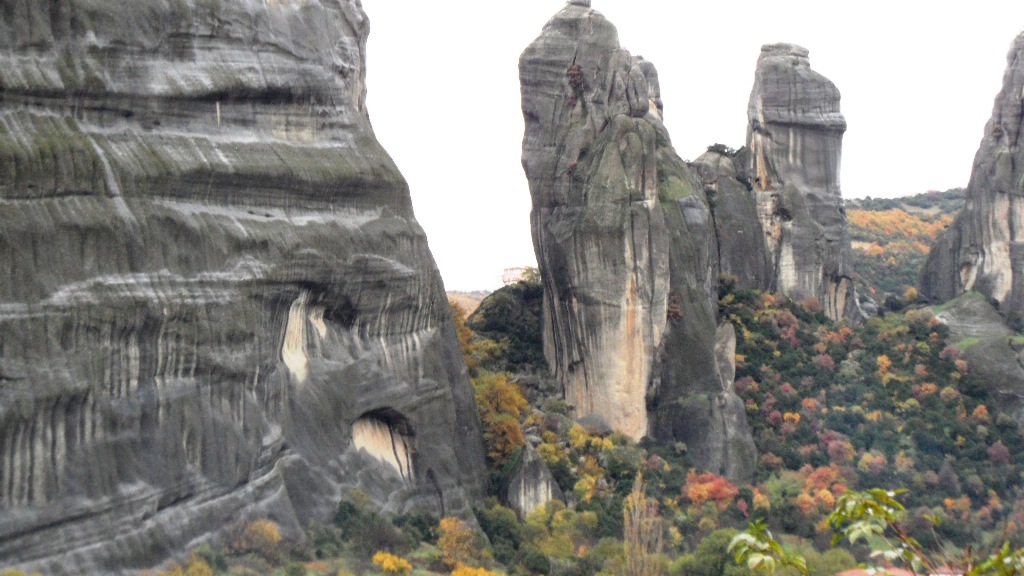 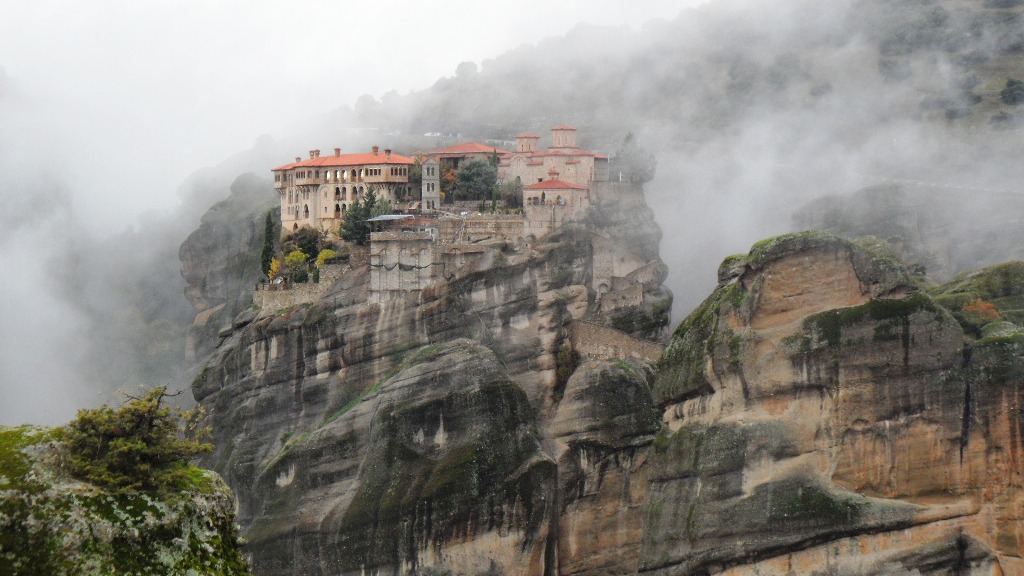 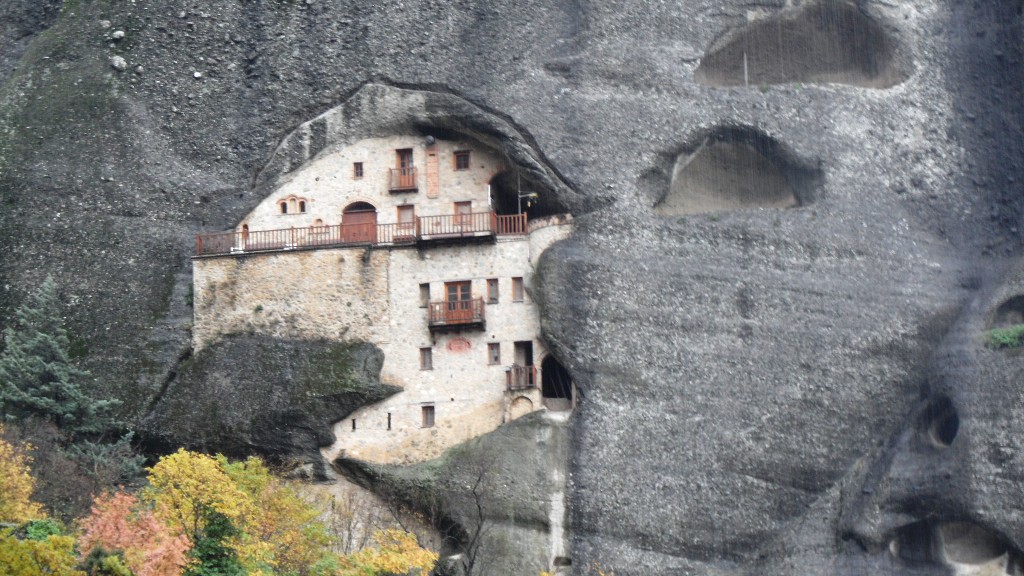 "We were actually very happy with the planning and the hotels / Locations in the Northwest of Greece. Love the app and did a mini blog ! We were really pleased with the itinerary, would we change a couple of things stay in a different hotel stay longer at certain locations of course. But we were pretty happy with it all and the effort that went into the planning. Driving in Greece was actually not that bad !"

"We just wanted to write to you to thank you for helping with our holiday to Greece the other week. We had such a lovely time, and you made everything so simple for us. We really appreciated you tailoring our itinerary to us so we could explore around Mount Olympus...and the Zagori region was amazing too - possibly our favourite part of the trip. Thank you so much for all your help and support. We had a great time!"

"Thanks for organising holiday for us. Really enjoyed it!"

"It was very relaxing indeed in that everything was taken care of by Thanasis and the Company. There were no extras because everything was covered in the price and organised by Thanasis - taxis, lunches etc. We had nothing to decide or worry about as he even chose the best Greek food for us to try and it was always excellent!! Thanasis was also very interesting to talk to and informative about Greek politics and history. He also found us an excellent young guide to take us up Mt Olympus - Alexandros ..."

"we had a fantastic time - everything went very well, the hotels were great and we loved the itinerary. We so enjoyed Meteora and the Zagori particularly, also Thessaloniki seved well as a city break, bookending the holiday. We hope to return to the Zagori and do more walking. Thanks for all your help."

"We just wanted to thank you both very much indeed for organising a truly fantastic walking holiday in Greece for us. Our self-guided walking holiday in Zagori National Park & Mt. Olympus was absolutely superb in every respect. The organisation, accommodation, food, walking & our local guide Alex were all excellent. I seem to remember asking when we first made contact if you could organise some walking for us in remote areas of Greece, away from the normal tourist haunts & having the ..."

"I've been meaning to write since we got back from our trip to thank you for helping us to organise the 8 day self drive part of our longer trip to Greece. We had a fantastic three and a half weeks away, with all the different parts fitting together really well. Northern Greece was a revelation to us, absolutely stunning. All the accommodation was good, with really friendly and helpful staff.The directions you sent were excellent, although, as the Greeks don't seem to go much for road signs, we did ..."

"I just wanted to let you know that although there were only 2 of us on the tour - I had an excellent trip and cannot recommend Alex and this tour enough. I really thought he went above and beyond what was required of him to make sure we had a good holiday."

"just wanted to thank you once again for putting our trip together for us. We all had an amazing time, the whole trip went very smoothly. We were particularly impressed with the first accommodation in Dadia forest and would really recommend this. The villa on Thassos was also excellent. The only disappointment was the main car hire which turned out to be more of a van and a bit of a heap - the air con didn't work which was disappointing but it got us from a to b without incident. I just want to say ..."