Lassithi is the easternmost region on Crete which has the picturesque town of Agios Nikolaos as its capital. Nearby are the villages of Plaka and Elounda, the latter being the port of departure for Spinalonga, formerly a Venetian fortress and leper colony. Further east is the pretty port town of Sitia, a stepping stone to the palm tree-lined beach at Vai. Ierapetra is the most southerly town in Europe. Don't miss the fabulous Lassithi plateau with its windmills and Diktaean Cave, reputed birthplace of Zeus.

During the Cretan fight for liberty from Venetian Rule and Turkish Occupation, the Lassithi plateau provided refuge to the persecuted fighters, a fact that forced the Venetians to forbid all building and cultivation in the area.

This region is steeped in ruins of ancient cities, settlements and buildings. There are quite a few spots worth visiting in Lassithi, like the archaeological sites of Gournia and Zakros, the Diktaeon Cave, the 15th century Toplou Monastery and the island of Spinaloga with its  Venetian castle. The cosmopolitan air of the island blows strong in Elounda, while other - no less beautiful - cities, towns and villages, like Ierapetra, Aghios Nikolaos, Sitia and Makrigialos, complete the diverse picture of this corner of Crete. Unique to all of Greece, and a "must see" is the forest of Vai, an area filled with palm trees. The plateau of Lassithi is one of the most beautiful areas in Crete. This green, fertile valley is home to 10,000 windmills, for which the area is famous.

The charming town of Agios Nikolaos is right in the heart of the glorious Bay of Mirabello with its breathtaking views and pleasant climate. It's the place where tourism first began in Crete and it gradually became a much frequented area, thanks to the wonderful coastline, clean beaches (nine have been awarded the European Blue Flag) and the rich variety of ancient sites to visit. Agios Nikolaos has much to offer both young and old. It's ideal for walkers, for those who seek history and culture, and there is a wide selection of nightlife to suit every taste. It's also popular with watersports enthusiasts and various hotels and sports centres have swimming pools, basketball, volleyball and tennis courts. In the centre of the town is the picturesque harbour, with the little lake of Voulismeni; the cafes surrounding the lake provide a popular meeting point for locals and visitors. Appealing too are the numerous small shops to browse through in the town's winding streets. Many of these sell traditional Cretan craftwork, jewellery and embroidery. For eateries you'll find plenty of tavernas, and restaurants offering a wide variety of Cretan culinary specialities.

Istro (Kalo Chorio) - in Greek this means “good village” possibly because of the rich, fertile soil in the area. It also has some of the most beautiful beaches in the Bay of Mirabello. It's often said that the southern coastline of the Gulf of Mirabello resembles the Riviera, but with uncrowded beaches and only a few hotels. This tiny village nestles in the midst of a verdant hilly landscape dotted with olive groves and colourful Mediterranean shrubs and plants. In past years the village has expanded towards the beach. Here are three attractive bays, shaded by tamarisk trees, with clean sand and pebbles, which offer a variety of watersports. Istro, though, is no bustling tourist village, and those who come to visit will experience a local way of life. It's easy to relax in the warm, welcoming atmosphere of the Greek tavernas, restaurants and kafenions, and the shops in the village provide everything you need on holiday. It lies a mere 75 kilometres from Heraklion whilst Agios Nikolaos is only 11 kilometres away. There is a decent bus service to explore further afield as well as beautiful walks in the locality. The new village of Istro sits on the site of the ancient town of Istrona, remains of which are still being found today. Because of this, the land closest to the sea has a conservation order and no new building may take place, which leaves the beaches uncrowded and unspoilt. The delightful beaches of Istro Bay are regularly awarded a Blue Flag for cleanliness.

Sitting on the banks of the second largest natural harbour in Crete, Elounda and Plaka are picturesque fishing villages along the coastal road to the north of Agios Nikolaos. The harbour is naturally well protected by a long peninsula and the island of Spinalonga, a former leper colony. Travelling north for about 4.5 km from the large village of Elounda with its vast central square, promenade and delightful marina, past various little landing places with moored fishing boats, you reach the quiet village of Plaka. Plaka has two shingle beaches and a selection of little fish tavernas on the sea front. Some 2.5 km further on there is a mini market. A regular bus service links Plaka with Elounda and with Agios Nikolaos. This delightful region is ideal for extensive walks. The traditional mountain villages of this area are unspoilt and give one a good sense of the original Cretan way of life. For sightseeing you may choose to visit the old Salt Pans, which are close to the ‘sunken city’ of Olous. And highly recommended of course, is a boat trip to the island of Spinalonga, the former leper colony with its old Venetian buildings. Thanks to the protection of the long peninsula, waters are very calm here and lend themselves particularly well to all forms of watersports. The clear seas, magnificent countryside and the tangible peace of this area will delight all visitors.

Ierapetra is the most southerly town in Europe and is known for its particularly mild climate. In ancient times it had important trade links with North Africa so today you'll find Roman remains, a Venetian fort and a Turkish mosque and minaret. In the centre of the town is a long promenade with shops, tavernas and hotels; the little harbour has a Venetian fort. The area is known for its agriculture so you'll see many greenhouses for growing vegetables. Inland there are pine forests and olive groves. The kilometre-long sand and shingle beach with numerous attractive coves has two beaches which have been awarded the European Blue Flag. This area lends itself to walking or for boat trips to the nearby bays, to the golden island of ‘Crisi” or Koufonisi with its unusual crushed-shell beaches. From here it's also possible to visit Agios Nikolaos, the vast Lassithi Plateau with its windmills, the Butterfly Gorge or the beautiful palm strewn beach at Vai.

The little seaside resort of Makrigialos, 25 km east of Ierapetra, is a good choice for a relaxing beach holiday. The village is named after the long stretch of sandy beach, which offers safe swimming for children. Makrigialos has a good choice of tavernas, cafes and bars and the little harbour with its traditional fishing boats is a favourite meeting point for locals and visitors. Enjoy fresh fish and local specialities looking out over the sea, stroll along the small promenade or have a coffee in one of the kafenions. The authentic villages in the hills behind Makrigialos are worth a visit and there are regular bus connections to the larger towns like Ierapetra and Sitia.

Kato Zakros is an traditional fishing village tucked into the southeast corner of Crete. The tamarisk-fringed pebble beach hosts several excellent fish tavernas. The area is home to a Minoan Palace, which is one of the most significant archaeological sites on the island. Some keen walkers may want to explore the “Valley of the Dead”, which leads from Pano Zakros down to the sea at Kato Zakros. Although the village attracts many visitors during the day, Kato Zakros becomes peaceful towards the evening.

Mochlos is a small island in the Bay of Mirabello, some 40 km east of Agios Nikolaos. The little fishing village opposite the island has the same name and is famous among Cretans for its specialities served in the tavernas by the harbour. In Minoan times Mochlos was an important port in eastern Crete; today small boats still cross to the island, only 150 metres from the bay, to visit its excavations. The bays around Mochlos are mainly rocky and great for snorkelling and there's a small shingle beach and a sandy beach in the area.

Sitia resembles an amphitheatre with its white houses, streets and steps climbing all the way up to the Venetian Castle. It's a steep climb from the harbour to the fort with its views towards the esplanade.  The sweeping beach, with its fine white sand, sun loungers, umbrellas and safe swimming, is ideal for beach lovers and has been awarded the Blue European Flag. The most interesting day trips from Sitia are to the Minoan ruins at Zakros, Vai beach, Palekastro, Topolou monastery, or the Valley of the Dead.

The old village of Palekastro is 19 kilometres from Sitia and was a farming village which has grown and become more lively in recent years, yet still very much retains its delightful character. From here travelling in various directions, there are numerous outings or sightseeing possibilities, for example, the beaches of Chiona and Kouremenos, which both have been awarded European Blue Flags, and are also very good for windsurfing. The tiny village of Agathia with its pretty sky-blue domed church, can be seen from afar. Other interesting day trips would be to Itanos, the smaller version of Vai, with white sand and slender palm trees, the Monastery of Toplou, and the Minoan Palace at Kato Zakros. There are plenty of opportunities to go walking as there are lots of gorges in this area. The most famous gorge is the ‘Valley of the Dead’, a sheltered, fertile, almost sub-tropical valley. The famous beach of Vai is 8 km away from Palekastro, and this has also has been awarded a European Blue Flag. With its pale sand fringed by tall date palms this is a delightful beach. The extensive ‘oasis’ of palms extends quite some way inland and the area is under a conservation order. You'll find a variety of watersports available and there are some beach-cafes serving snacks and drinks.

Crete's fifth largest town is more laid back than many other towns on the north coast and is a great base from which to explore eastern Crete.

Agios Nikolaos is right in the heart of the Bay of Mirabello with its breathtaking vistas, azure blue seas and pleasant climate.

Elounda and Plaka are picturesque fishing villages along the coastal road not far from Agios Nikolaos.

Ierapetra, the most southerly town in Europe, is known for its particularly mild climate.

Istro has some of the most beautiful beaches in the Bay of Mirabello.

The little seaside resort of Makrigialos, east of Ierapetra on the Libyan Sea, is an ideal spot for a relaxing beach holiday.

An island in the Bay of Mirabello. The fishing village opposite (also called Mochlos) is famous for the specialities served in its tavernas.

The village of Palekastro is a former farming village that has grown in recent years yet still retains its delightful character. 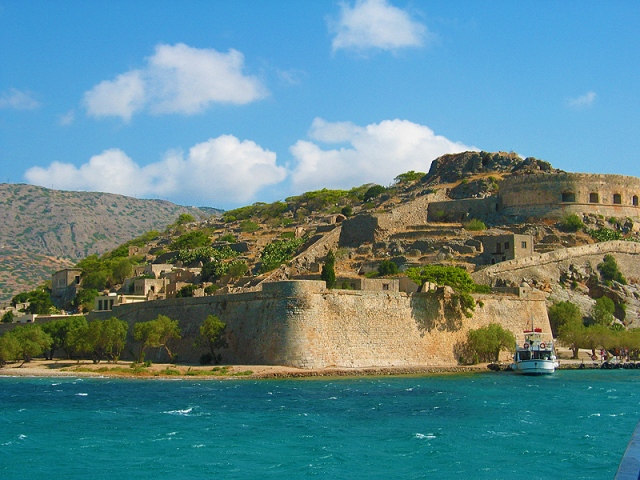 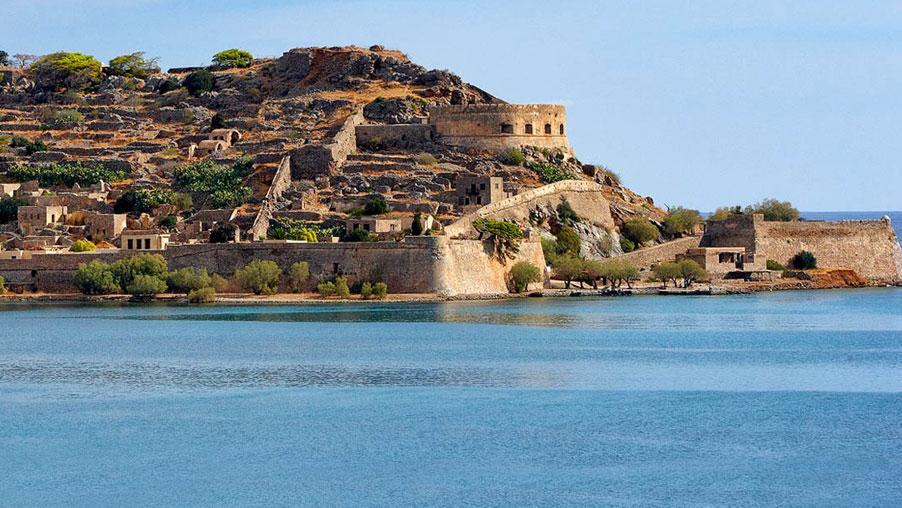 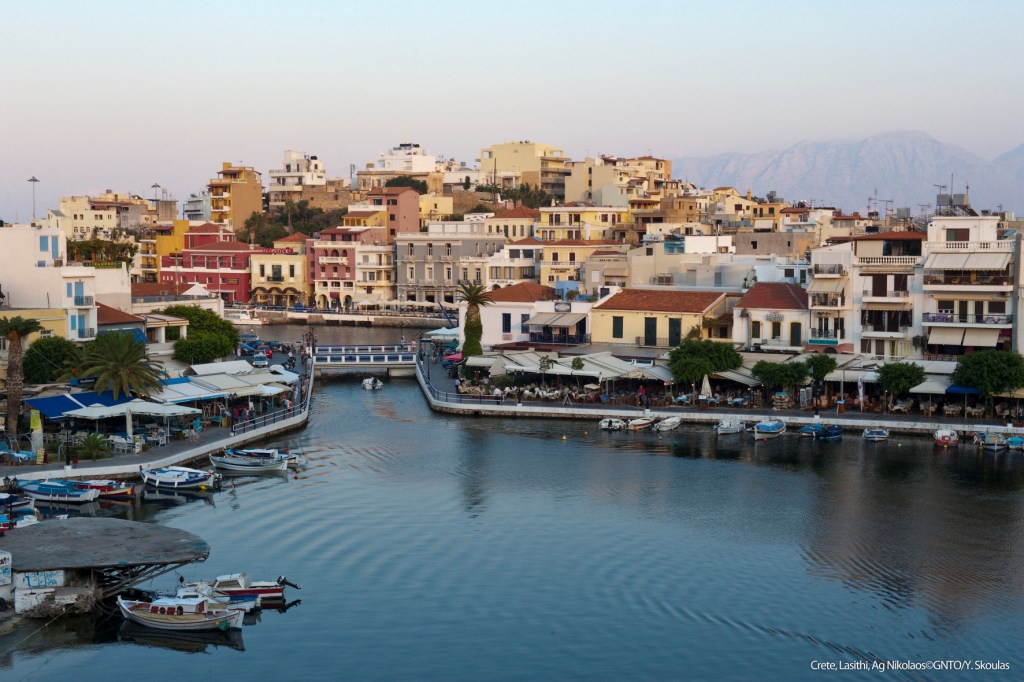 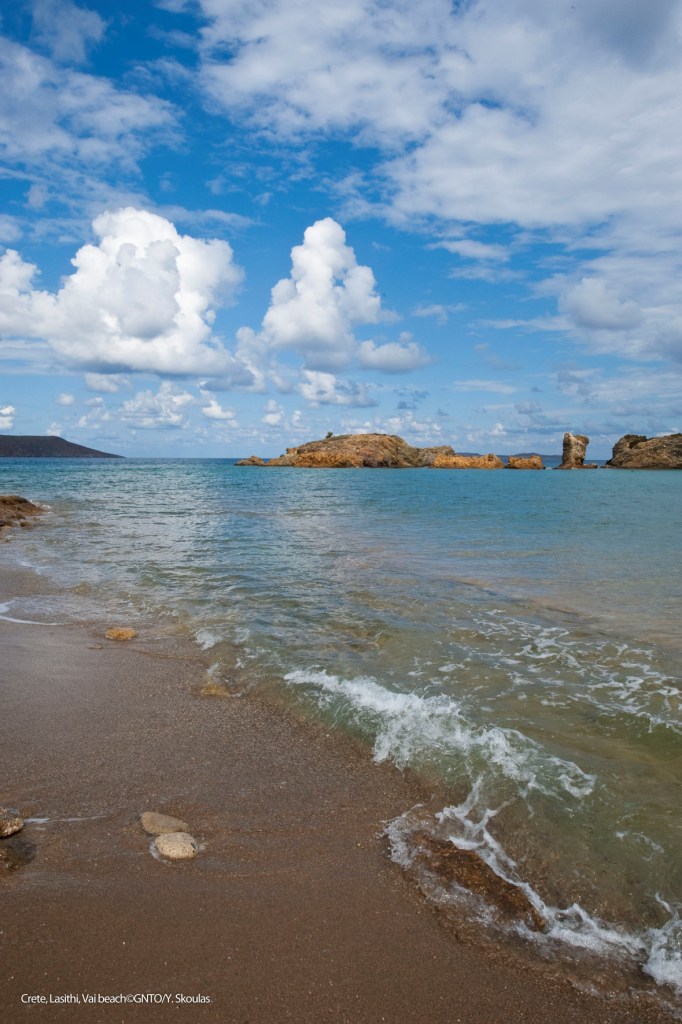